"The Words of the Prophets Are Written on the Subway Walls..." 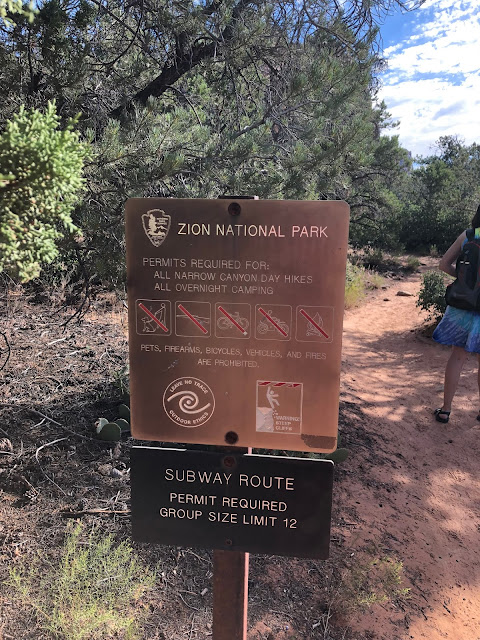 I know that I said the Friday Antelope Canyon Tour was on the top of our list of things we did on this vacation, but the Subway Canyoneering hike would be right next to it on that list. 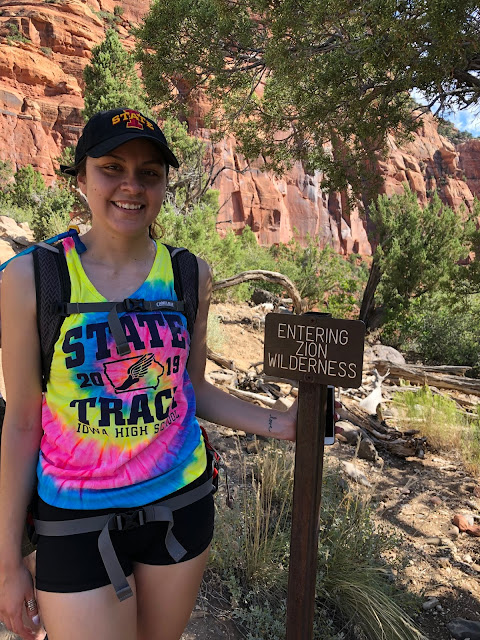 In my extensive research for this trip, I found this helpful blog: https://www.citrusmilo.com/zionguide/lowersubway.cfm. In it he talked about a canyoneering hike in Zion called the Subway.
It explained that we would need a permit, and it was hard to get one. We had to apply for it three months in advance and then they would let us know the month after whether they drew our names in the lottery.

We were very lucky and we did get drawn. We also had to pick up the permit the day before and get poop bags, and if we had to poop, we had to go in them and carry it back out with us. You'll be happy to know that it wasn't necessary. We also had to bring some warm clothing in case something bad happened to us and we couldn't climb out of the canyon. Whew! It all seemed a little daunting. 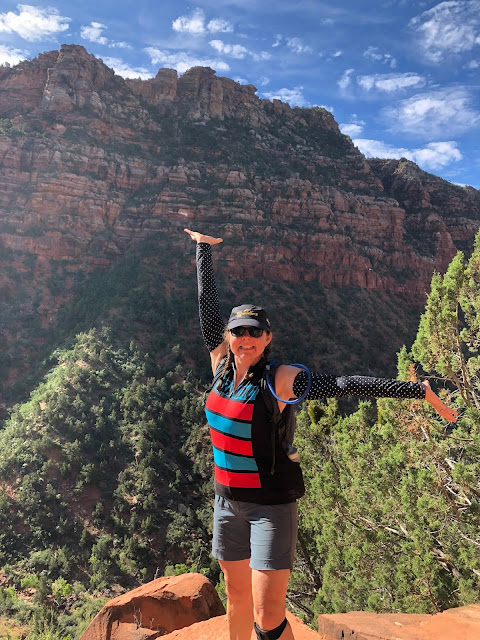 The hike was supposed to take 6-10 hours. Originally, we were going to try and get up really early In case it did take us ten hours, but our glamping place supplied us a free breakfast that started at 7, so we ate and then drove the hour and 15 minutes it took to get to that side of Zion. 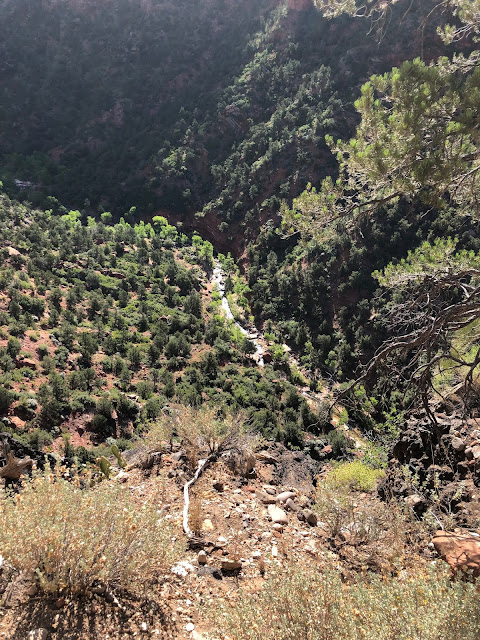 It was an out and back, so the first and the last parts of the hike were the least enjoyable. 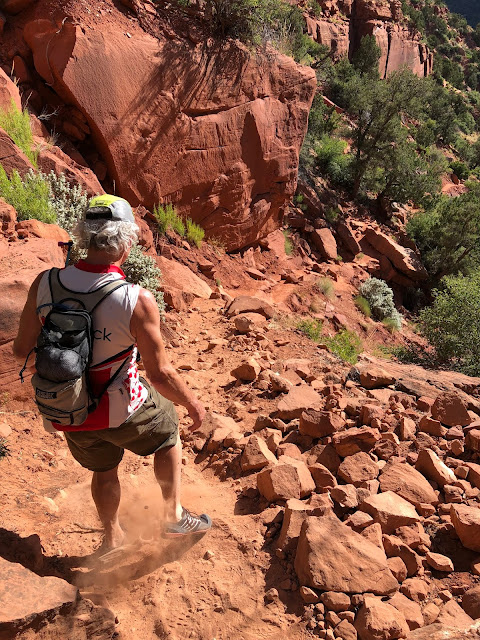 We hiked straight down about 400 feet on a sometimes slippery, dusty trail. 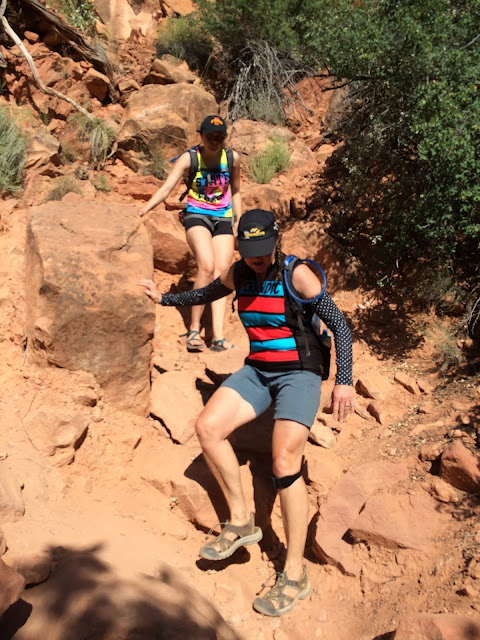 Being Midwesterners, we said a lot of "Opes!", and "Woopsies!" as we tried not to trip over rocks on the way down. 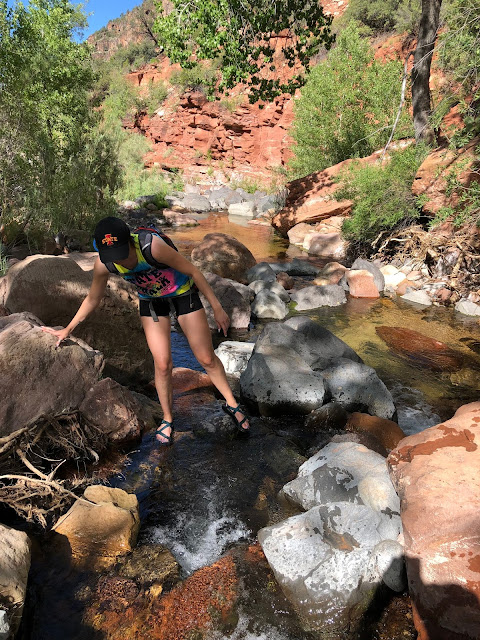 Once we made it down that "hill", we hiked our way down the stream bed, which made me wish I had stronger ankles. 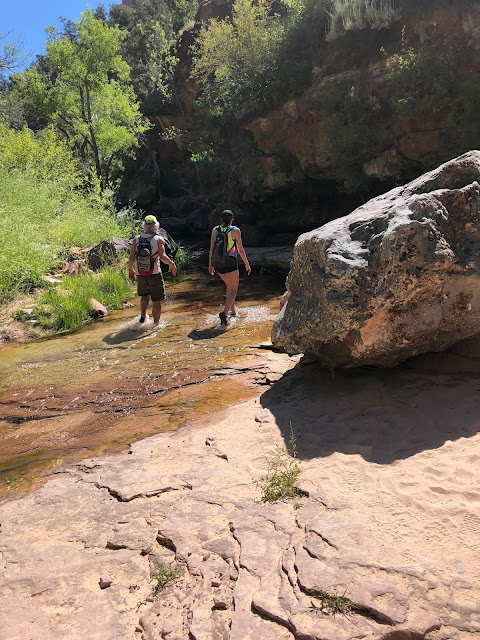 After hiking a few miles, we finally made it to the prettier parts of the hike. 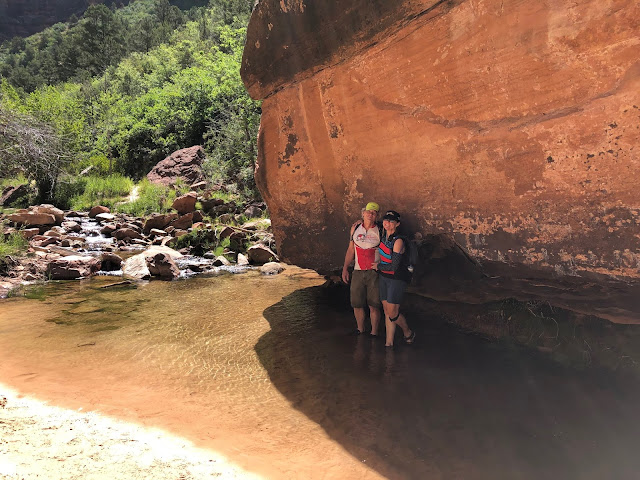 The terrain, even around the stream was really varied. 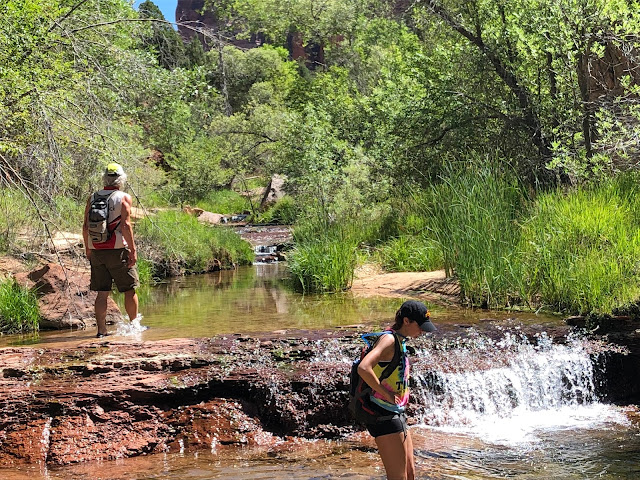 As we neared the Subway, we started hitting these gorgeous, red rocked waterfalls. 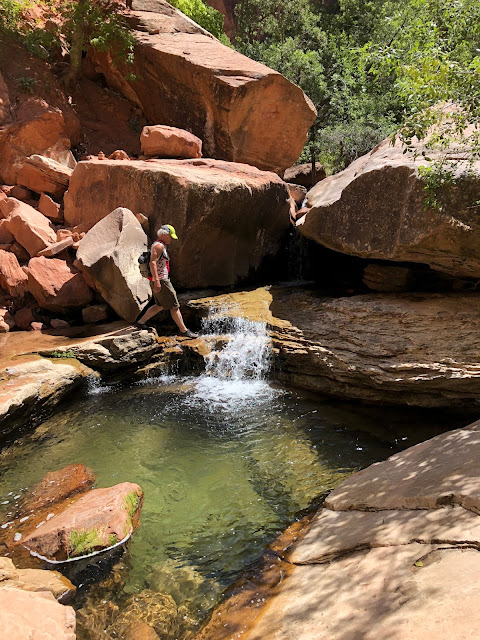 The hike was thirteen miles long, but it was slow going on account of the tough terrain and us wanting to stop and gawk and swim in the holes. 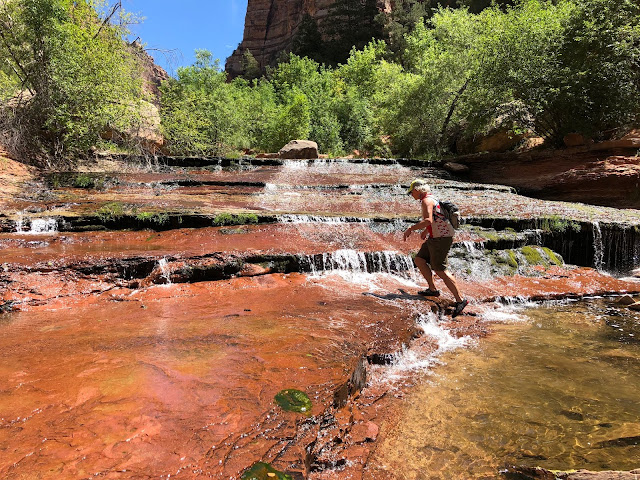 We had heard that some of this red rock could be pretty slippery, but it wasn't too bad at all. 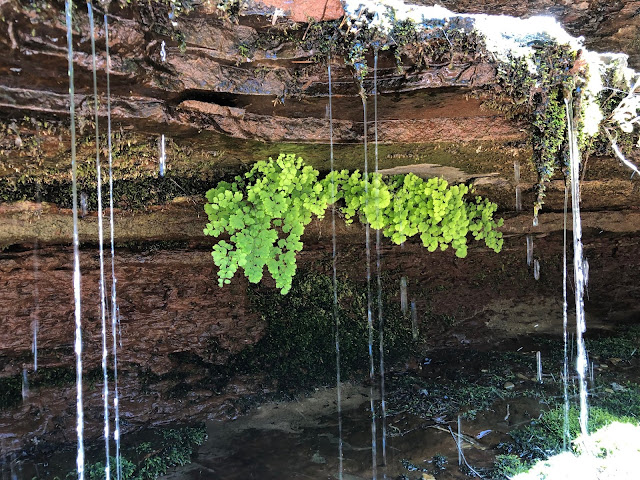 I loved these hanging gardens. 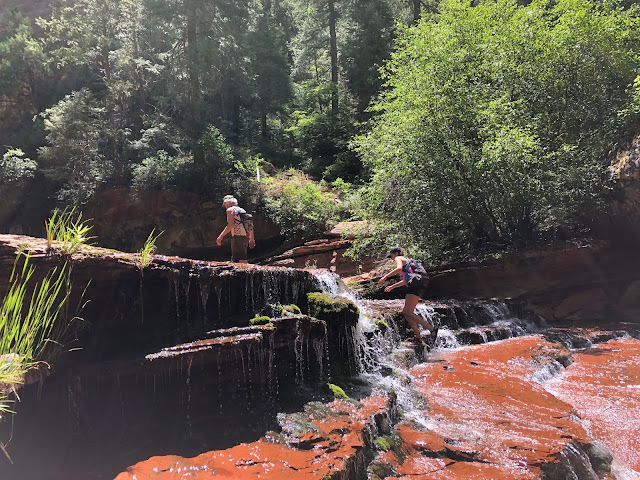 We didn't think it could be any more beautiful, but as we got closer to The Subway, it got prettier... 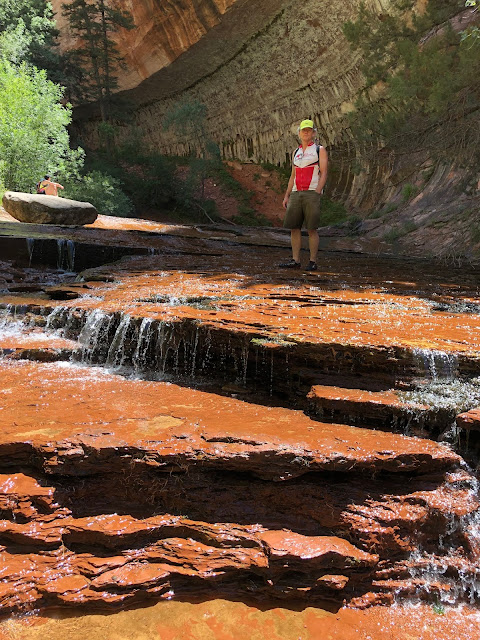 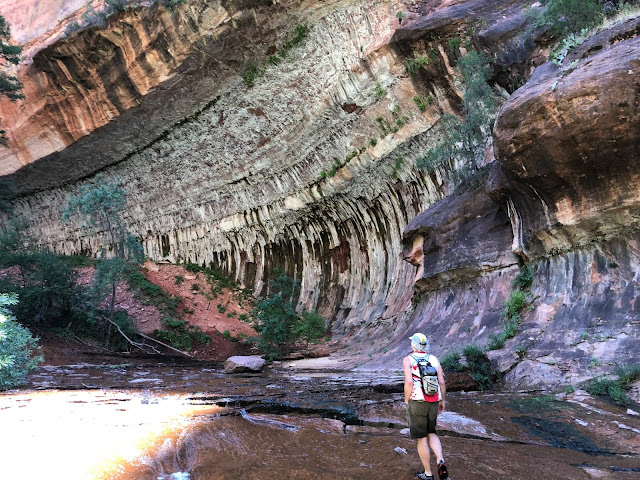 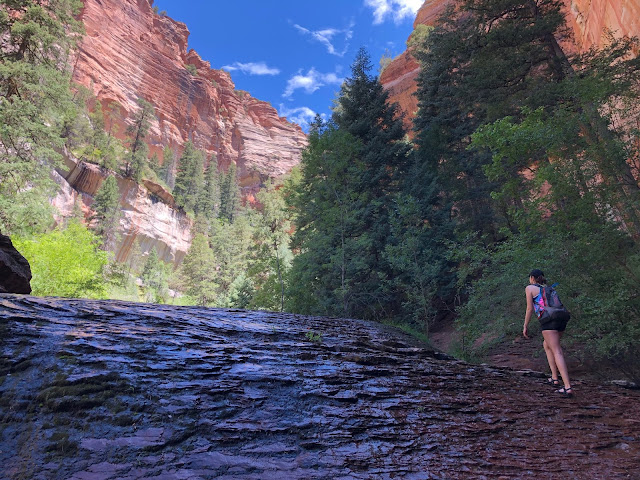 It was hard to imagine that the Subway itself wouldn't be anything but anti-climactic after hiking through all of this. 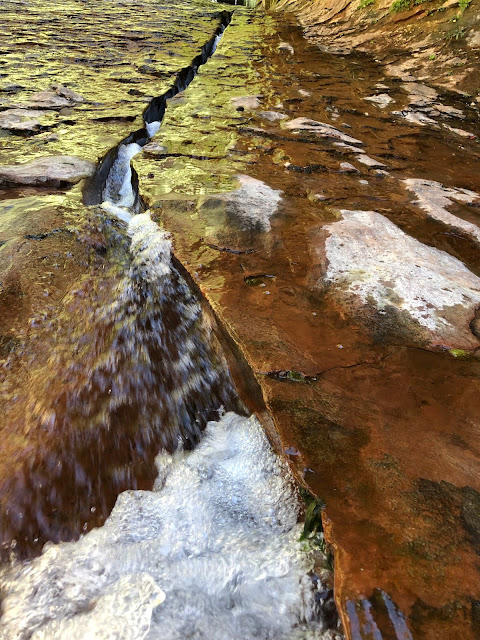 This little waterfall crack might someday become the next Grand Canyon. Behold the power of water. 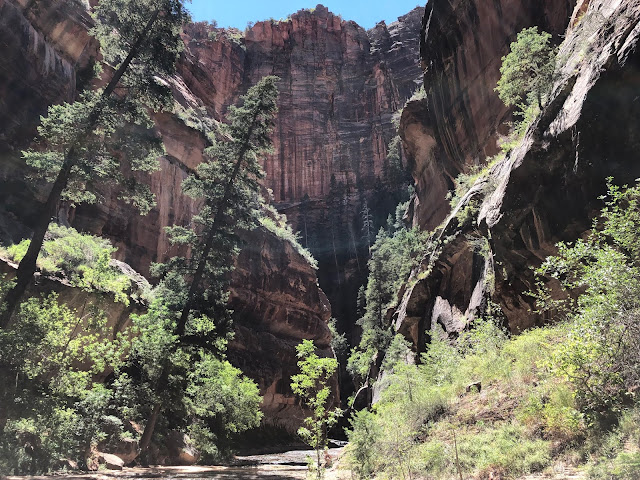 We finally hit the Subway area. 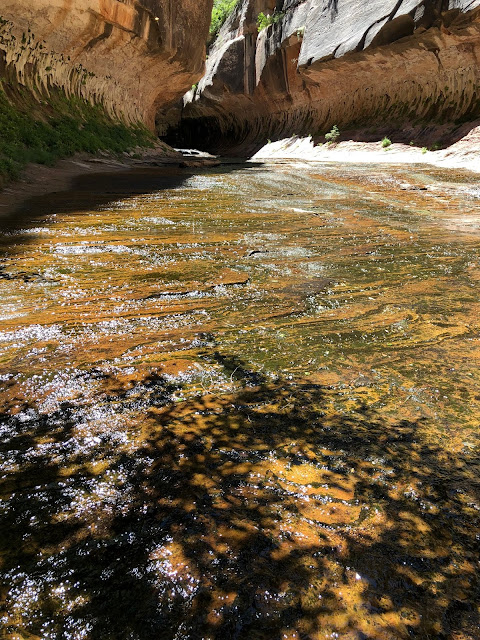 We wandered around the outside part of it and talked to the people who were canyoneering from the top down, which required wet suits and rappelling gear. 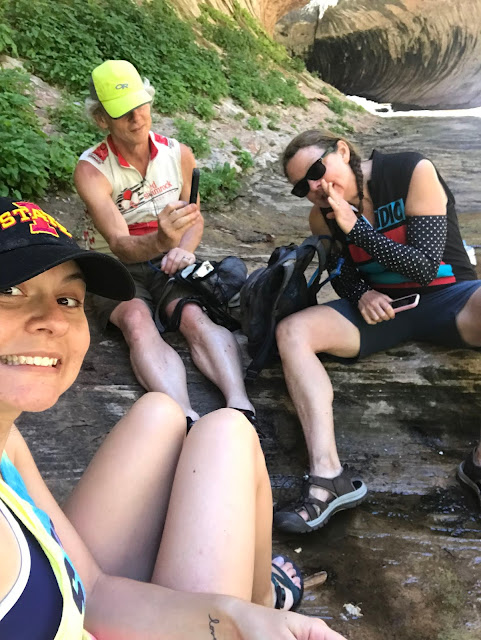 We figured we should stop and eat lunch before we hiked to the pools and the waterfall yet to come. 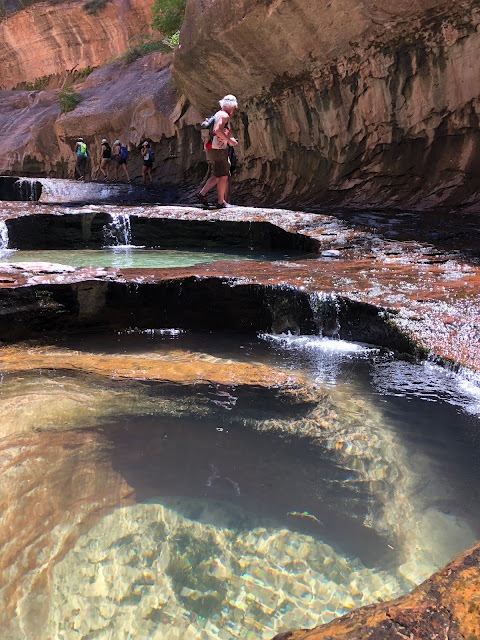 Then when we hit the pools. Wowee! They weren't anti-climactic at all. It felt like we had traveled to another world. 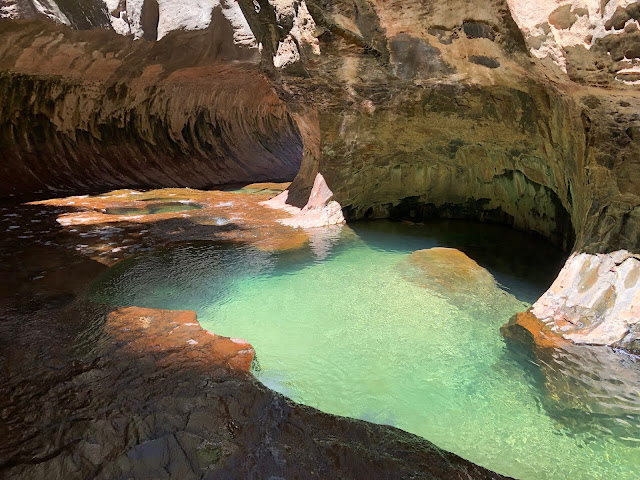 A world of infinite beauty and possibilities... 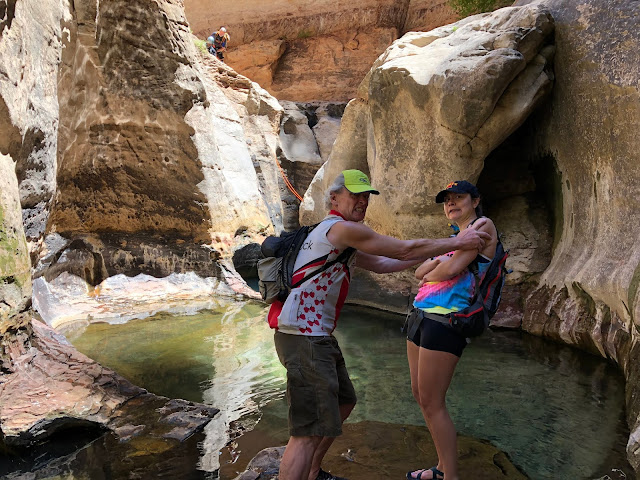 ...Until we came along and messed up all of that magic with our human horse play, 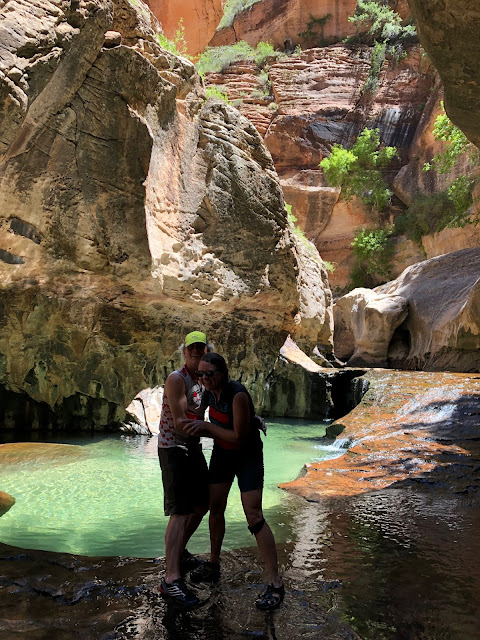 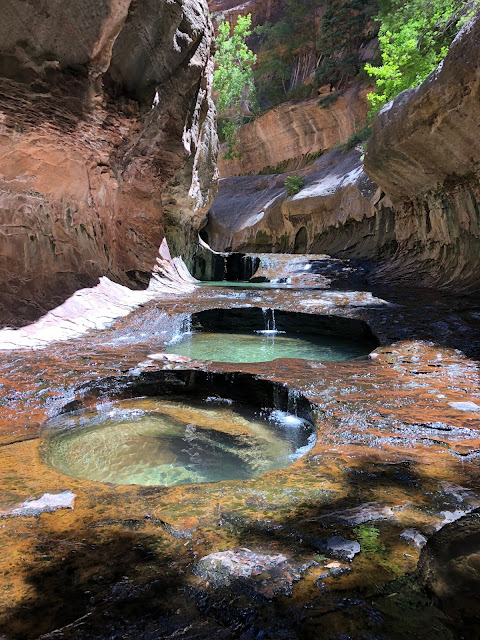 So, this is The Subway. 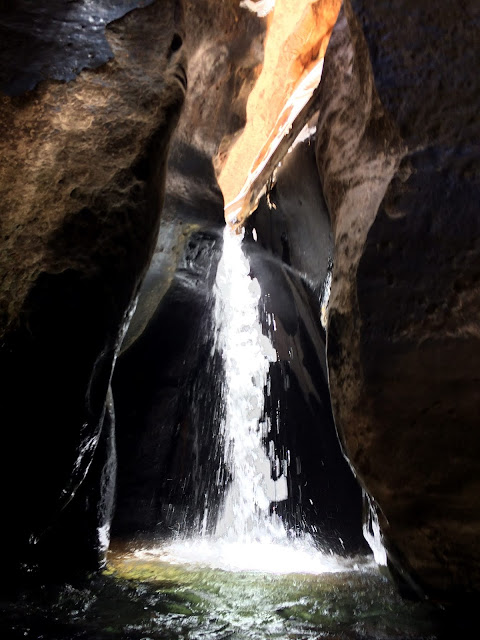 When we were hiking in, there was a group of younger women. I'm going to say they were in their twenties, but I'm old enough that anyone under forty looks like a teenager, so who knows.

Anyway, this group of women headed out on the hike right behind us, and we kept running into each other after one of us would stop to eat or play in a swimming hole, or what have you.

When we got to The Subway, you can swim to a twenty foot high waterfall. At first, Coadster and I weren't going to do it, since we knew how uncomfortably cold a waterfall fed swimming hole can be, but some of the women in the group said they were going to get in there. So, we decided that if they were women enough, we would be too. 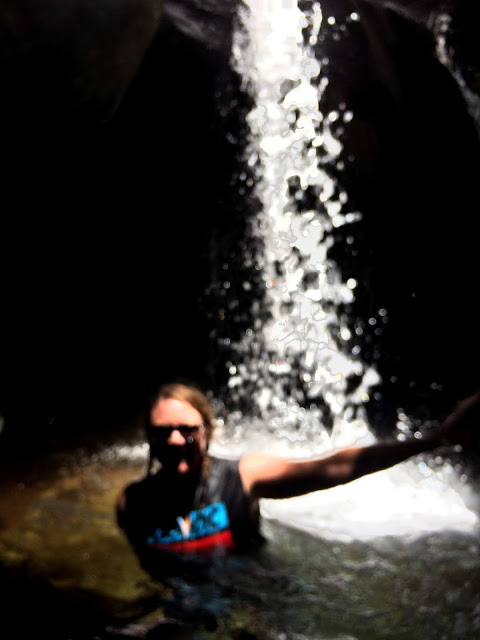 Turns out the water wasn't that cold after all. We took turns playing in the pool, and then we figured it was time to hike back out.

We were exhausted before we even got to the uphill part and then once we ascended, we were like the walking dead. But we made it out and back in about 7.5 hours, and even though I hate to use the word, it was epic. 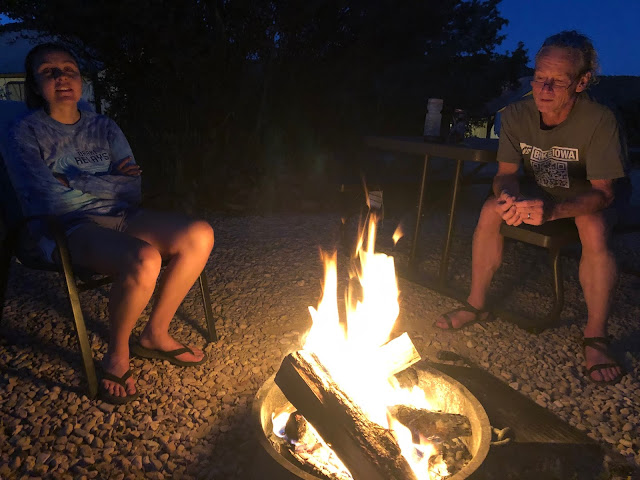 That evening we had pizza and beer at the resort restaurant and then went back to our tent space and had a fire. I have no idea how we stayed awake as long as we did.
Posted by Churlita at 10:20 AM