On a Steel Horse I Ride. 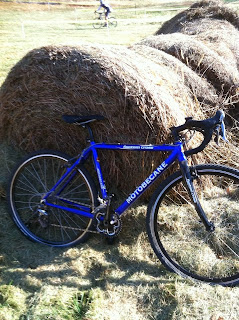 I thought I would acquaint you all with the bikes in my stable. I know that I have written about some of them in the past, but here I am, organizing them by order of when they were acquired.

Here is my first real bike I ever got. I bought it with my income tax return in march of 2011 for $800. It is an aluminum frame Motobecane cyclocross bike. I raced road and cyclocross and gravel races and road it on mountain bike trails. If you are poor and want an all around bike that you can do most things on, I recommend getting a CX bike. I still use this bike on my trainer and for RAGBRAI and I rode it around Louisville when we went to Cyclocross Worlds. It is a bike I take when I don't want to worry about it getting stolen. I would be very sad if I didn't have it, but I have other bikes who can do what it does now. 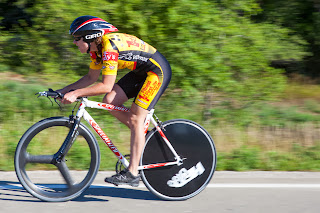 The second bike I acquired was a gift from John. It was his old road racing bike that he fixed up for me to use to race time trials and triathlons. I bought the aero bars and paid $600 for the used  tri-spoke and back disc wheel from a friend of mine. It is an a aluminum frame Specialized E5?. I'm not sure of the year either, but it has served me very well in time trials and triathlons for the last couple of years. There is a chance that I might take over John's old aluminum frame P1 time trial bike, but I haven't been able to get the aero bars and the fit quite right yet. 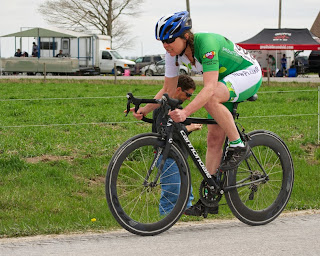 No Trophy, No Flowers, No Flashbulbs, No Wine 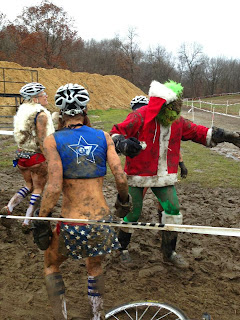 So, I haven't been writing much here or anywhere and I need to start. I also want to work on looking at my training and racing and trying to remember what worked for me, what didn't, where my head was on a particular day, and even more importantly for me being in my late 40's, where my hormones were.

To that end, I am going to try to change my blog a little and use it to talk about training and races more, so I can look back and see what I was doing. It's hard for this old lady to remember from one day to the next, let alone one year to the next, what the hell I did. I will still write about personal stuff here and there, but those of you who couldn't give a rat's ass about racing (and I do understand that), feel free to ignore me. I also hope this helps any women, older women especially, to get into racing or if they already race, to commiserate and rejoice or feel superior or whatever helps.

This weekend was my favorite race of the year. It is called Jingle Cross Rock and it is in my hometown and it draws cyclocross racers from all over the state and it's also a 3 day party. Everything about it is wonderful.

This has been kind of a tough Cyclocross season for me in general. I had to cat up. I was a beginner last year and placing in most of my races. How it works for most women, is that we don't have a lot of categories. We are either beginners or we race with the best in our fields. I found it VERY humbling to go back to being one of the last finishers in most of my races. Lord knows, I'm not expecting to win nationals or go to the Olympics in any field, but to consistently be fighting for second to last place did tend to bruise my ego even more than my legs this year.

At one point early on, John told me that I didn't look like I was having any fun and seemed pretty negative about it all. It was hard to hear, but I knew he was right. I just had to correct myself. Instead of stressing out so much about my results (or lack thereof), I still tried as hard as possible, but put way more emphasis on having fun with it. I love to ride my bike up hills and in mud and sand and I get so happy when I "master" a part of a course I didn't think I would ever figure out how to ride. Plus, the other people who race cross are always amazing and fun when I come with my head screwed on the right way (which can be tricky), I have more fun than should be legal.

Going into this weekend, I was ridiculously excited and I was at a good hormone place and ready to ride. I raced the 2/3 women category on Friday night. I started out pretty strong, but I was bounding over the logs, when the woman in front of me just stopped. I had nowhere to go and was in mid-leap, so basically slammed into the fencing and my bike. I have no idea how I was able to stay upright, but I did. Of course, most of the field had passed me as I got on my bike and tried to get my chain back in a decent gear, at that point and I played catch-up the rest of the race. Not exactly my forte'. I was able to get a few places running up an evil hill, but finished a few places from last.

On Saturday I woke up feeling crappy. My nose was running all over the place, my ears were itchy and I was dizzy (even more than normal). I decided not to race and hoped I would feel better on Sunday.

Sunday came and my dizziness subsided. Even though I was still sick, I didn't want to give up a chance to do a muddy race. So, I raced. I was second from last by the end, but I learned how to ride my bike up a muddy hill, after a brutal run-up and I couldn't do that the first couple of times I pre-rode the course. In my delusional brain, I was triumphant. I celebrated the rest of the day.

Today, I am still a little sick. I really want to run or ride, but I'd rather rest and get better for my race on Saturday. Most importantly, I am still smiling from all of the weekend antics.
Posted by Churlita at 12:06 PM 2 comments: