When I'm Out in the Street, I Walk the Way I Wanna Walk 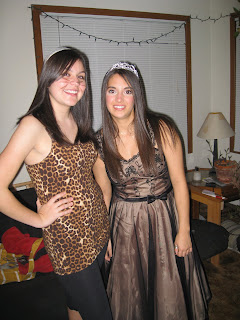 Today I'm combining the Saturday Scavenger hunt with Halloween- it's just like chocolate and peanut butter. I chose the word this week and it was street.

Remember how I had three choices last night? Yeah, well. I went with the fourth one. I wrote something on my Facebook about how I might stay home and drink wine and almost immediately, my girlcrush responded by saying she was coming into town and I better hang out downtown with her. Who was I to say no? 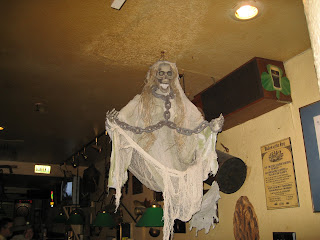 At around 8'ish, I went to my friend K.'s and brought over some pumpkin bars and hummus. She and her boyfriend were getting ready to go out. The only costume I could think to pull together was a witch. My friend K. calls that the default girl costume, and she was being a witch too. I used some of their make-up and painted my face green, like the witch on The Wizard of Oz.

K. and her boyfriend were going to the party I mentioned on my last post and then to The Mill. I dropped them off at their soiree and then I hoofed it downtown to the Dublin. 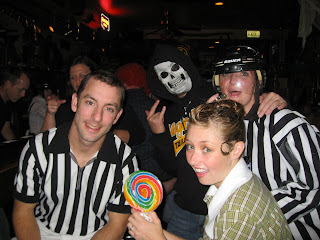 When I got there, I was happy to see all my friends were dressed up and fun. The girlcrush was dressed as a munchkin from The Wizard of Oz. Great minds think similarly, don't they? My friend T. was dressed as a ref and she had a whistle that she would blow whenever she needed to call a party foul. By the end of the night, there were more and more of those. 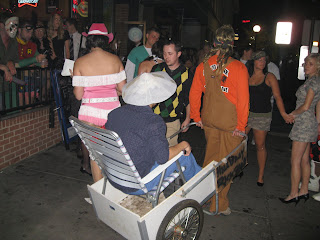 The bar was fun, but after a while, I got restless and took it to the street so I could check out everybodys costumes.

This one was great. These two guys made a rickshaw and the White guy pulled the Asian guy all around downtown. Awesome. 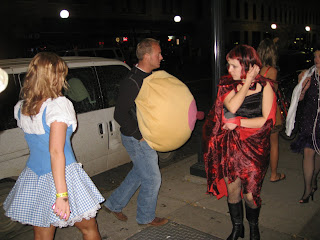 This guy was a boob. 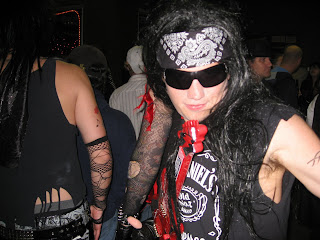 I found some 80's hair metal band guys in front of the Deadwood, who were very accomodating about letting me take their picture. I found a Storm Trooper and Princess Leia in front of Prairie Lights Bookstore, in keeping with the geekiness of the costumes. 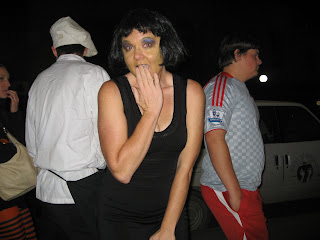 Here's me outside, after I traded my witches hat with my friend's Incredibles character wig. Everybody kept calling me Edith Piaf, so we traded back later. 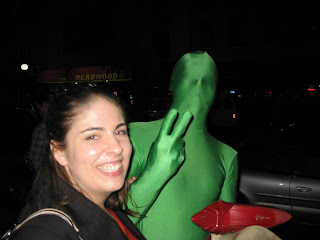 You thought my face looked green, but I was no match for this guy. 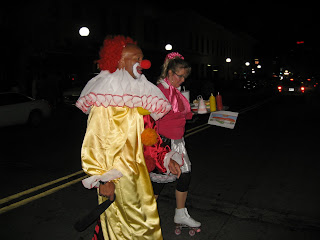 I caught Homey the Clown and a roller skating car hop heading across the street. 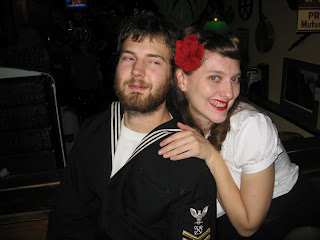 The street was great, but after a while I figured it was time to go back inside to see what was going on with my friends. I didn't know this couple, but they were friends of some other people at our table and I loved their Pin-up Girl/sailor combination costumes. Adorable. 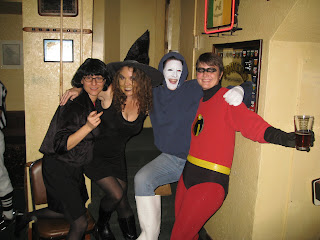 Here's me and my friend after we switched our wig and hat back. 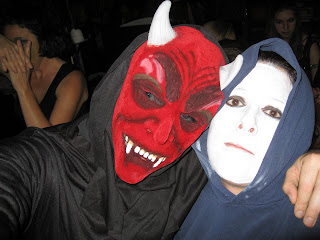 These were some super creepy face costumes. I love how dramatic they are next to each other. 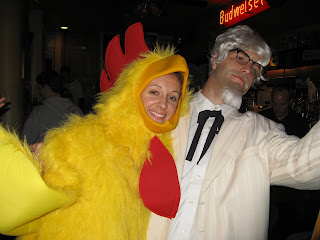 I'm awarding this couple the most original costumes of the night. After seeing a hundred Jokers and Sarah Palin's, it was really nice to meet The Colonel and his chicken. 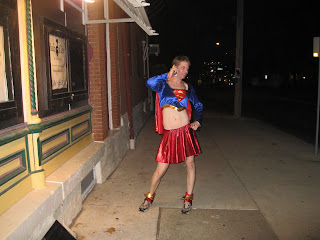 K. and her boyfriend were going my way, so we walked to John's grocery first so K.'s boyfriend could get a little more beer. K. and I were beered out, so we hung out on the street and ran into Super Boy here. 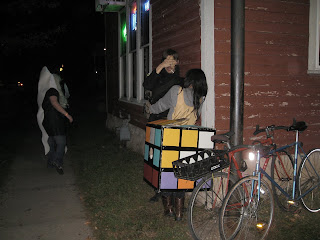 Then as we walked past The Foxhead, we saw this guy trying to make-out with a Rubik's Cube, and that was so awesome that I made it the last pic I took of the evening.

I hope you all had memorable Halloweens no matter what you did too.
Posted by Churlita at 11:47 AM

Those are all great costumes.. I posted already, but I had dressed up as a She-Devil.. Looks like you all had lots of fun..

Churlita,
I dressed up in OR duds and put a seventeen year old to sleep so we could remove his appendix.
Your party looked like much more fun. I'm begining to she witches in a different light.;-)
rel

"This guy was a boob." - in more ways than one, or was that just his costume?

I like your witch's costume, plus the person wearing a Rubik's cube!

Wow, you saw some pretty great costumes on the STREET!

Coadster and her friend look very, very cute and you make one hot, Incredible witch...

Oh! And your work is not yet done... who are you tagging for next week?

I love all your photos... And especially love the white guy rolling the asian guy around. So great.

OK, gotta do the scavenger hunt.

We don't take Halloween anywhere near seriously enough in the UK. That said, I did spend the evening having my leg devoured by a cardboard great white I made whilst wearing and Amity Island t-shirt.

I love these pictures. Very good stuff and it looks like a great weekend of partying. So, who are you tagging?

Thanks for reminding me I need to post Halloween night pictures. Funny night in your little town... great shots.