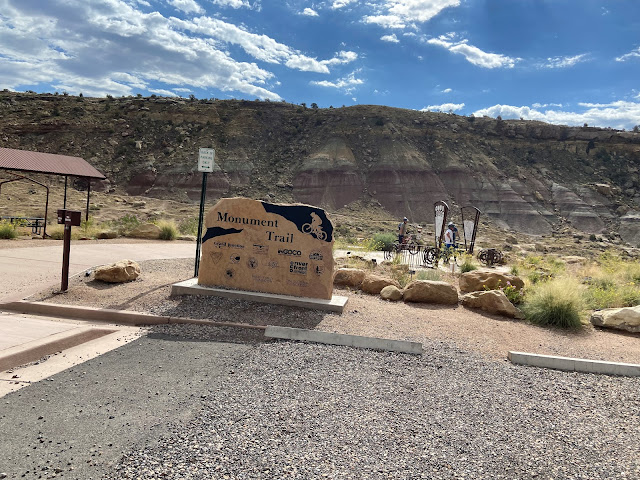 Well, kids. I was able to make it to Moab. A lot of times when it seems like things aren't working out easily, I wonder if the universe is trying to tell me that whatever I'm trying to do just isn't the best idea. This time, after my sister-in-law had to drop out of the trip because their dog is very old and they didn't want to leave her with anyone else, and then I wasn't sure I could make it after finding out I had Grave's disease and wasn't supposed to get my heart rate up on a trip that was all about strenuous hikes and hilly mountain bike rides, the trip was actually almost perfect.

My brother showed up to our house with his tricked-out van around noon on Friday. He had a three hour Zoom meeting, so John and I went to lunch, and bought groceries and finished the last little bit of packing. We probably got on the road at around 4 pm.

We stopped in Des Moines to eat dinner, and then drove the thirteen hours left overnight. I say "we", but I really mean John and Bill. I wasn't comfortable driving at night because I have terrible night blindness, and also my Graves disease can give me double vision. I just couldn't imagine driving an unwieldy vehicle, and suddenly seeing two of everything. Yikes! 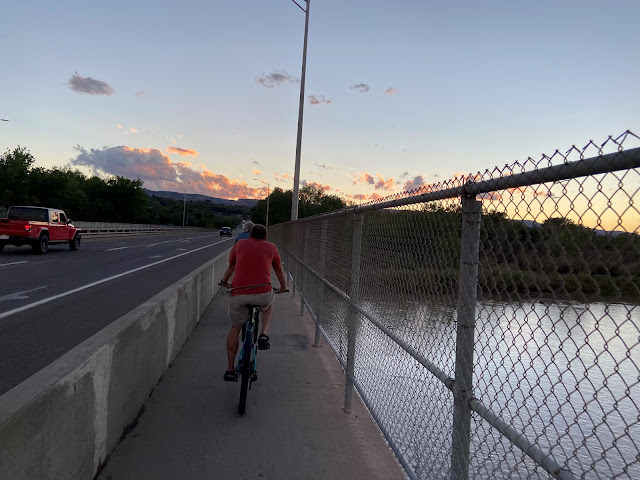 We made it to Grand Junction, Colorado at around 10 the next morning. I had never been there before. It is a cute little town with a lot of mountain bike trails and a bike path that goes on for 20 miles.

I'm having a hard time sleeping in general with this stupid Hyperthyroidism, but it was even harder trying to sleep in a van on VERY bumpy roads in Colorado, so I was exhausted when we finally got to Grand Junction. So, the boys went mountain biking while I got a few more desperately needed hours of sleep. 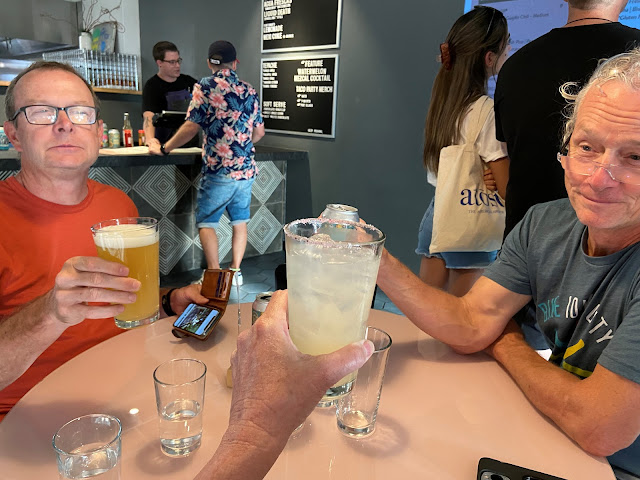 Since I'm not able to get my heart rate up, John had the brilliant idea that we could just rent an e-mountain bike for a few days while we were in Moab. Of course, I didn't have that e-mountain bike in Colorado yet, so I asked the guys if they were okay with riding around on the flat bike path, and getting dinner and a beer while we played. I heard there were cool murals and sculptures along the path, but since it was almost dark when we got to it, and we were starving, we didn't get to see them. Next time!

We went to Taco Party for dinner and the food was really great. I also had a delicious margarita. It was just what the doctor ordered...So to speak. We rode to a brew pub after dinner and sat on a rooftop deck for one more drink before we headed to our Motel 6 for the night. 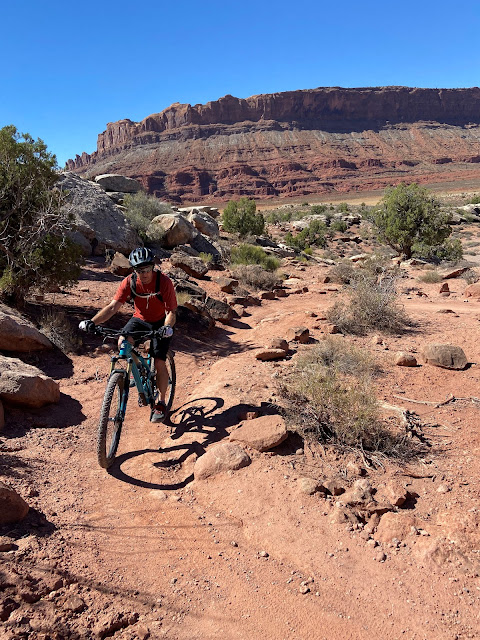 The next morning we drove straight to the Bar M Ranch trails in Moab. I didn't remember them being so hilly, but then I didn't have to worry about getting my heart rate up too high the last time we were there, so it's not like I was very aware of the hills back then. 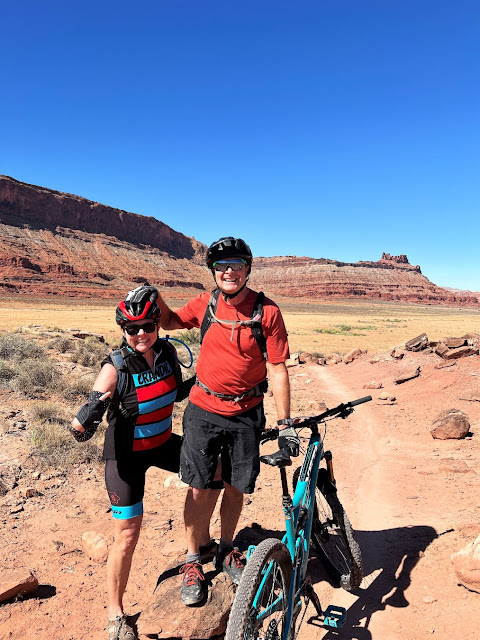 I tried to go slowly, but you have to have some momentum to ride the rocks. I rode a little longer, and then decided to let the boys ride the harder trails while I chilled out in the van. I was getting out of breath on the climbs, and I didn't have to look at my sports watch stats to know I had gone way over the 140 beats per minute, my doctor told me I had to stay under in order not to die of a heart attack or stroke. 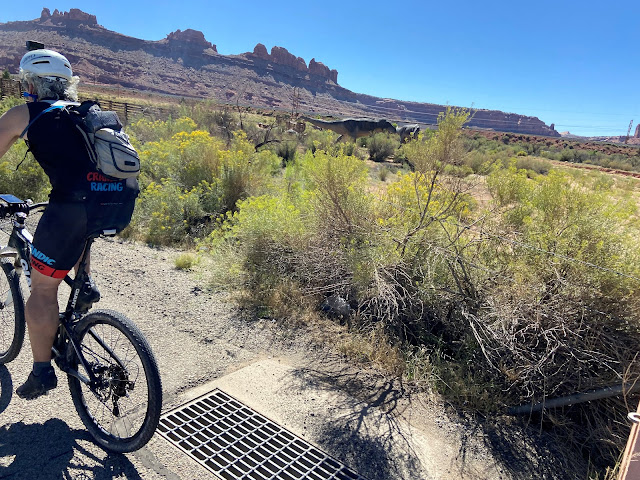 When they finished mountain biking, John suggested that we ride the bike trail back to where we found the giant dinosaurs. If you've ever met me, you probably know that I love all of the cheesy things: Dinosaurs, aliens, Big Foots (feet?), Bat Boys... They all amuse me. So, when we were driving to the trails, I saw the giant dinosaurs, and I wanted to get closer. 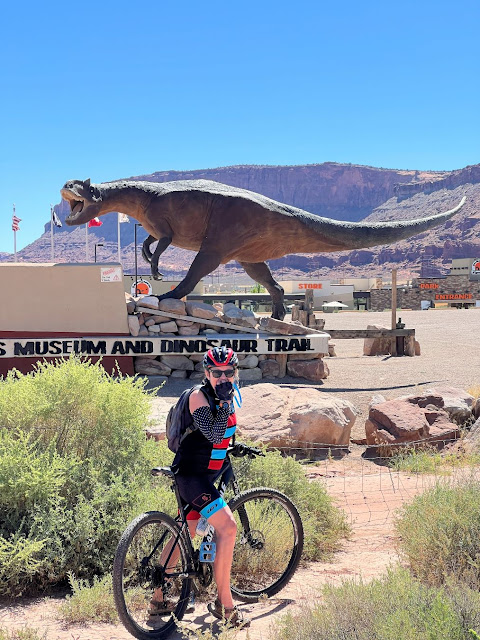 I was very happy to meet the fake dinosaurs. We looked at buying tickets to get even closer and see even more, but they were $18 a person, and even I couldn't reconcile that cost to hang around with some sculptures. I did buy a "Philosraptor" t-shirt from the gift shop, though.

We finally got to our campsite by around three in the afternoon. I'll write more tomorrow, hopefully, but the first day and a half of our trip was fun and very educational. It was instructional for me to figure out how I was going to navigate this stupid Hyperthyroidism/Grave's Disease. It was annoying to see how many things it affected. I found myself talking about it way too much, but I was learning about it as I went, and limited by it and I had to remind my traveling companions why I was so tired, and irritable, and anxious, and all the other annoying things my body was doing to me. Believe me, I felt VERY lucky to get to go to Moab, I just had a lot to figure out with my new condition while I was there.

Dinosaurs! Excellent! Im glad you got to go. It must be frustrating to learn how to navigate new limitations, but you are learning and before you know it, you’ll find your pace. I tore the tee shirt!